The Tales That Can't Be Told: It Did Happen One Weekend... 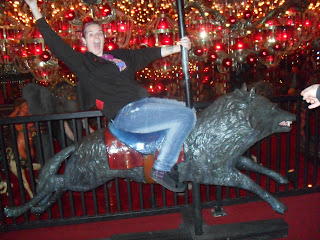 I can't tell you about this weekend. Not everything anyway, that tale's too long and no one person saw it all. I saw more than most however, being one of the few who was sober for it. And I was there. That's Moxie McMurder there, editor of UK's Lead Jammer Magazine. We brought her over for a week, to see what would happen. And it happened allright.

If you want the whole story, or at least as much as anyone is talking about, you'll need to do some stalking on your own. The Persons of Interest are all out there. Go find them, FB, Twitter, Web Pages. The clues are there, piece it together. 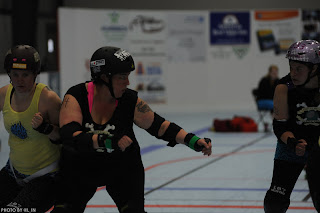 All the Derby Photos are by Kyle Cassidy. They're from our Sunday morning scrimmage with MRD Wrecking Dolls. By not a strange coincidence, I seem to be in all of them, but it's my blog and I'm proud of that Bout. I can say, without any inflated sense of my skills or ego, that it was my best Bout yet, and I learned a LOT. I know a bit more than I did going in, and know what I need to work on. STILL sore from it.

We're going to jump around here tonight, by this point on Sunday, remember, a whole lot had already gone down. Including poor Moxie, I think the afterparty Saturday night nearly killed her. Partly my fault, I left her there with Pinky and Jenetic, so I could go home and get some sleep, and be ready for this Bout. Oops. Didn't see her again until Sunday morning. Hard to believe she was that bright, awake and cheery! (don't believe it, not for a moment) 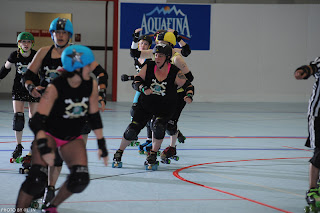 Kyle is doing a book of Roller Derby Portraits. You can, and please DO, follow his Roller Girl tumblr feed and his Roller Girl FB page (Please go and "like" it) There's a lot on the project in both places. If you'd like to see some of the pictures we took at the epic 12 hour photo shoot on Friday, look at the Chippewa Valley Roller Girls profile pics on FB. Nearly the entire team has changed over to them. Go you, and stalk!

You'll also be able to see his work, and CVRG, in the next issue of Lead Jammer Magazine! 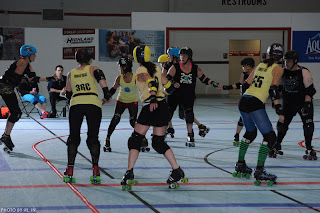 The shoot was beyond fun, several locations, much hopping about, some really interesting situations, and a whole lot of chaos, all perfectly orginized and by Friday night, the non Bouting the next day people were ready to settle down and start some drinking. I wrangled Friday, didn't do my shot until Sunday. You may have seen the picture of me holding the frame of bees, it's out there on FB and Twitter, and I have to say, by that point in the weekend, holding a frame filled with 100's of bees and no bee suit on wasn't as scary as you'd think it would be.

We did the shoot after our early morning Hangover Scrimmage (it's just CALLED that, skaters who Bouted weren't the ones drinking all night at the Afterparty. No. Really) I had Slam'er to help me and and it went like clockwork. Kyle set up a background outside the hive area, Slam'er went in, smoked the bees, pulled out a frame and brought it over. She made sure where I grabbed it had no bees, Kyle shot FAST and I gave it back to her and walked away.

Mostly I was thinking abut the Scrimmage. When you get knocked down that many times, (and if I may say so, did some knocking down myself) afterwards, you don't have a lot you fear. Or the energy to fear it. 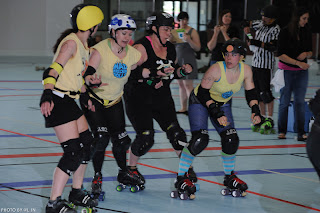 We had practice on Saturday morning, which may seem strange on Bout Day, but we've found it is nice to get together, we don't kill ourselves at it, but being together is important. I know I've said it before, but it does need repeating: I love my team SO FREAKING MUCH. This weekend was all about them, I wish I could post pics of every single one of them. There was more Derby too, Joan of Dark, from Naptown was there, Dill Hero, Naptown announcer joined Matt in the booth, Razor from Bloomington came along, Allie Gator from Madison was there all weekend, Tyranny from MVM tech'd for Kyle and took photos.

And Moxie. Did I mention how much we love her? This is family and she's right there with us, now and forever. I have to say tho, there's a lot of weeping going on with the skaters here, missing her, and everyone else, who have gone back where ever, scattered again.

Another thing that made the night perfect was my Flash Girls bandmate Emma Bull, who I haven't seen in some years came, with her husband, Will Shetterly. It was her first Bout. And she fell in love with Derby. Why we have no pics of us, I do not know. There was a lot going on that evening.

Derby runs on such things. 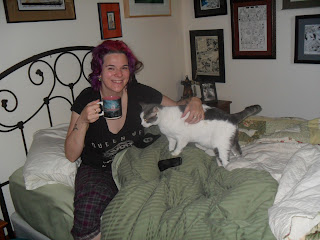 I'm not sure why this picture of Moxie drinking coffee in bed with Coconut is off center, that wasn't the PLAN, but that would be this weekend for Moxie and I, at any rate. We improvise with the best of them tho, and if one thing didn't work, another did.

I'm not sure who exactly had the idea, might have been Joan of Drunk, Joan of Dark's alter ego, I know Moxie wanted some Ink to commemorate her first visit to the US, and it was decided, long after I'd gone to bed, that the group would be getting matching tattoos. Something to do with Wisconsin. We went thru a lot of ideas, and I'm just as glad most of them fell thru, but the upshot is that me, Moxie, Joan of Dark, Dill Hero and Allie Gator all have some Shakespeare Ink. We got up, the gods know how, early on Monday morning to take Moxie and Razor to House on the Rock. In a word: More fun that I can relate. If there was any doubt to the bond between Moxie and I at this point (there wasn't) it was settled on the drive down and back talking music. It seems we both have the weird  70's early 80's imbedded deep in our souls. And we can sing along to any country song going. No matter if we've heard it before or not. 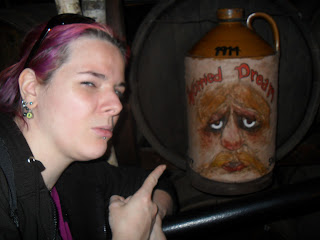 This is Moxie recreating her Hangover at House on the Rock.

The weird got weirder when we got up on Tuesday morning and still unsure of WHAT we were getting tattooed, decided to go into a local shop and if there was an artist free, we'd be doing it. What ever it was. We walked in and the artist/owner said "Hey, great Bout on Saturday". If THAT isn't fate, I am not sure what is. That's Derby for you.

We got the tattoos and emailed pics to Joan, Dill and Allie Gator. 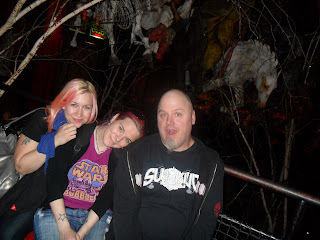 Still with me here? That's Joan and Dill, with Moxie in the middle. I told you we were going to jump around. I am sure I am missing mentioning things, and people I met, new friends I made, but we knew that was going to happen from the start, didn't we? 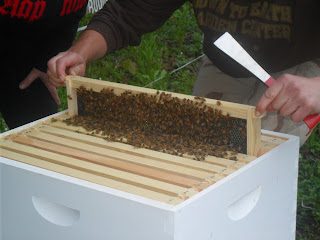 We took Moxie out to the Farm of a 1000 Ways to Die, twice in fact. Once to flip the entrance reducer on the newly installed Farm Hive, and again a few days later, on Tuesday, at 6:30am and if that doesn't define brutal after this weekend I don't know what does. We needed to check that the Queen was doing her job and laying, which she was. Being that tired, we were pretty sure we didn't need bee suits for this little thing, that's Slam'er there with the frame, and me on the left.

I'd like to say we were badass enough to have followed thru, but this was another Plan that got revised VERY quickly. 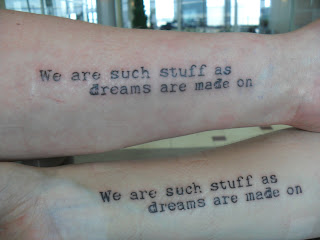 That's some of it. As I said, no one person can tell the entire tale, nor, I think should anyone try to. Weekends this special don't come along often. It was bringing together a group of people who love each other, and who believe that, if you can think it up, whatever it might be, that it can happen. I would say to you: Just go for it. DO IT. Whatever it is you want, it can happen. Make it happen, what have you got to lose? We did this, we had the idea and we pulled it off. Together.

At one point I asked Moxie if this quote didn't sound too arrogant. In typical Moxie fashion, she answered "Hells, who cares, it's fucking true"

And it is. We are such stuff as Dreams are made on.

posted by FabulousLorraine at 8:34 PM

A great representation of thoughts. I consider my self lucky to be here
THanks
fat loss diet
fat loss tips
fat loss guide
fat loss advice

Packers And Movers Hyderabad takes the satisfaction to offer its clients with pragmatic front entryway #moving organizations the whole way across Hyderabad town. Because of the wide knowing and adapting to copious clients of assorted sorts, we can recommend you with some astounding choices.

Generally I don't read anything but thanks for writing when i read this i felt how graceful as a writer you are.thank you for posting-Packers And Movers Jaipur

Packers And Movers Hyderabad Relocation, Main Office in Hyderabad India, is a most important company relocation and home Shifting services association provided that relocation solutions to individuals and company houses.

Hi – It’s good to read such interesting content. I agree with much of what is written here and I’ll be coming back.
Thanks again for posting such great reading material!! To get more relevant information visit here
Packers And Movers Bangalore to hyderabad

I was very impressed by this post, this site has always been pleasant news. Thank you very much for such an interesting post. Keep working, great job! In my free time, I like play game: imgtaram. What about you?