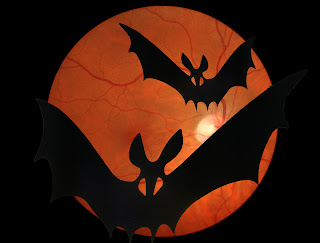 I am going off to haunt things, but will take lots of Pics of our Very Haunted House. Skelley is already there, along with Boss's Really Scary Rabbit and many other Spooky Type Things for Haunting Purposes.

Tonight is going to be a good night!

Hope yours is as fine!

posted by FabulousLorraine at 3:47 PM

I bought in chocolate skellingtons but so far only one trick-or-treater - it's now nearly 9 p.m. so getting late for the little ones.

May have to eat the Skeletons myself...

It IS the best night of the year! Have fun!
Best,
Billy Bones

Have a great Halloween!

Have a great night!!

May all your tricks be amazing, your treats delicious and your haunting free of malice.

NO trick-or-treaters dare out scary driveway...and we'll be out, in any case. Usually t I make an excuse to buy some sort of candy I like, and end up eating it all. Didn't do that this year. Go me...

Happy Halloween, Fiends and all (but particularly Fiends)!

I've carved my 2 pumpkins which sit on either side of the steps, staring at the kids as they climb the stairs. I have the witch up in the window, I have the bowl of candy. My neighbours go all out and scare the bejebus out of the very little kids, so those are the ones who come to my house.

That was a perfect little tidbit from Kitty.

Have a great night Everyone.

Oh, how I wish I was Stateside to experience a Halloween with Fiends!

We had no trick or treaters last night -understandably in the storm. Halloween is slowly catching on here.

Given that it is Hallowe'en, and Boss being inChina an all, I wonder if we should be at all worried in case the nice hair hallowe'en special was a premonition....

Where are you dragonsally? I wish my grandkids could come over and trick or treat before they are much older.

Happy Hallowe'en or as I like to say with my family background.. Happy All Hallows Eve on the culmination of these 3 nights. Grinz. We have only had 2 kids together so far, my hubby is wondering where they all are! Early yet tho. Will update blog later with rescue stuff and candy bowls.

M really wants to give out candy but we have not had any takers yet. If we are going to trick-o-treat we better get going. I hope everyone has a fun, safe, magical night!

Just took William trick or treating and he had a great time! He just turned on the Peanuts Halloween special. He likes Simpsons and even Family Guy (most of which, fortunately, goes right over his head), but nothing beats gold old Charlie Brown for him ...

Oh! Speaking of which, he got a ROCK in his candy bucket! He was THRILLED!

It's been a long, long day, but it's finally over for me. Goodnight, everybone!

I have leftover mini Play Dohs from the treat basket. Who wants some?

Louisa!! Thank you for a delightful surprise. And it came on the day itself - how appropriate.

I'm glad the skull is useful - one always hopes they will contine to be full of jolly things!

Nice Hair is slightly scarey, in a not-nice way.

Happy All Saints Day to those on the other side of the world.

Hope the rest of you are having a great night.

Going out seemed like a good idea. I forgot that would mean coming home while the rowdy college students were just getting going. Obnoxious, most of them.

That or I'm just bitchy tonight.

Now to go look at Birdchick's pics on a real screen...

I enjoyed my Halloween hugely, although I may have over done it on scaring the kids front. Few times we had to run down the path to get them back as they were backing away with horrified expressions after my clawed hand creeping behind the door performance. Still. Good fun was had.

Have masses of fun!

DragonSally, I've never done much for Hallowe'en and I'm definitely an American. :-) Most people I know don't get too fancy (except the frat boys down the street using it for yet another excuse to get drunk). Most people I know either take their kids trick-or-treating for candy and/or go to parties dressed up as various things. Many people love the dress-up. Personally, I am too lazy! For many people, it seems that it's not that huge of a holiday. Unless, of course, one is eating EVERY vanilla Tootsie Roll EVER MADE. Then the hugeness is the person (like I am in the process of becoming!), not the day. :-)

meee! i <3 playdoh i keep a few on my desk for conference calls. the smell is so calming.

It was the most popular item of the night, that's for sure. I may not hand out candy at all next year. Just Play Doh. :)

I love this Holiday most of all.

Had such a fine time tonight, being Spooky and giving out rats and eyeballs and scaring people.

Very tired, will post some pics tomorrow, tho I didn't get a lot, was having too much fun...

I think its the dress ups I envy. Haven't had an excuse to do that since I was at uni 20 however many years ago.
Im having to do this on my old computer. Decided to back up files to portable disc on my 'regular' laptop. This one is so noisy...its almost deafening.

Of course, my nano file is on the other laptop. Obviously I really didn't think this through very well1

Happy haunting!
I wouldn't mind to know the story for the scary rabbit (it is very scary).

A dreary day turned into perfect weather for the trick-or-treatin' -- skies cleared, but not too much, to reveal a full moon with mists trailing occasionally across it.

And upon arriving home, I put on Oingo Boingo's Dead Man's Party while the monsters sorted their loot.

Particularly delightful to me is that K has taken to howling like a werewolf this week (she does it during the day, too, so I'm sure it's only play), and L's suggestion that we add "blood" trailing down the jack-o-lantern's head from the area of incision to get the top off.

Let's have a party there's a full moon in the sky
It's the hour of the wolf and I don't want to die
I'm so happy dancing while the grim reaper
Cuts, cuts, cuts
But he can't get me (I'm as)
Clever as can be, and I'm very quick, but don't forget
No one lives forever!

Sally, I'm glad Hallowe'en is catching on there. Hard for me to imagine life without it. :) So much fun to be had, if it suits you.

Meant to add, C and I watched Drag Me to Hell last night, in tribute to the weekend. If you have any taste for horror with a dollop of humor, I'd say it's worth renting.

Oh! And this evening I finished reading P&P&Z, adding my Marginalia notes to those of other fiends. Who wants it next?

and 'night - hope everyone celebrating this day had a lovely time of it.

and from the last post, {{{dabbler}}}, I had the same week, with different details.

The timing was all planned, Siri [cough cough] :) glad you got it. Skully is back home with me now, filled only with the strawberry chocolates (does anyone like them?).

Stayed home for various reasons last night, we were going to get scary movies but ended up watching Dara O'Briain - I think our roaring laughter disturbed the cats more than the bangs from the fireworks.

It is way too early. Captured last night on my own blog. I think Sakura needs the vet, she has been reverse sneezing some or it might be coughing, hard to tell. She seems well in herself so far tho, so keeping an eye on her. Wishing everyone a lazy Sunday.

Happy All Saints' Day and also happy November. Did you know on 17 November the new Star Trek movie is coming out on DVD?!

Dan Guy wins for coolest Halloween Present EVER. Who knew? WOrking on Blog from work today, will include pics!

Had an awesome halloween night. Behind on reading posts here though! Soup Night tonight, so one more excuse to wear the costumes and have light saber battles in the front yard.
Ventress

November? I mean, I knew it was Halloween, but how is it November now?

Back from in-laws, but now must go rake leaves and plant tulips.

Wow Chantrelle, those are some amazing costumes! Ben's beard is seriously cute!

In spite of my end-of-evening crabbiness, Mom and I had a good evening out. We went to our former neighborhood for the best heart-attack-on-a-plate Chicago pizza. Then to see Zombieland. That was mostly fun. It Did Not have to be that gross, but I liked the way they played with the Rules, having the text show up in scenes throughout the movie.

The old neighborhood is up by Loyola University, and now we live by De Paul. We saw some great costumes. A Mad Hatter, carrying a teapot and cup. Two women paired up to dress as bacon and egg. A very scary scarecrow. A crew of Vikings schleping a cardboard ship and oars.

We also got stuck in an El car chock full of very loud, already drunk students. Hence my mood.