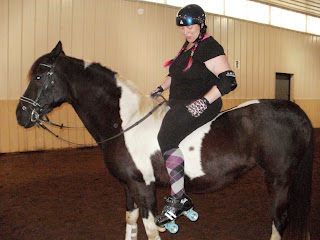 Posted this to FB yesterday. The winner of the caption contest, (not that there was one, but if there HAD been, he was the winner) has to be from a Ref, Rick Harder, who said "No knee pads and non-compliant wrist guards. I'm sorry, but you can't bout with this horse."

Speaking of contests, we have THIS ONE going on from the folks at The Night Garden Project, which is a group of artists who donate their time and work to raise money for the Great Lakes Bengal Rescue Group, a cause near and dear to my heart.

They also run a Shop over there, with all proceeds going to GLBR. My favorite has to be the Magic Mug, a coffee mug featuring our very own (wandering pudding) F1 Bengal Magic. So if you have missed this contest, or aren't artistically inclined and want to help still, buy yourself something fun.

As ever, I am grateful to each of you who have helped save so many Bengals. And we HAVE been saved, as a rescue group, because of you. Special love to Jess, who has spearheaded the Night Garden Project. I love you Stalker-Wife! 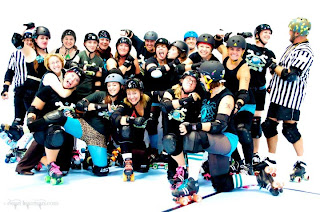 (wish I had a photo credit here, will edit if I find one, promise!)

Saturday Night is Bout Night! Last home Bout of the season for the Chippewa Valley Roller Girls! Which yes, would be MY league! (as in the one I am a part of) This isn't exactly a Derby blog, and I'm not sure I can adequately explain anyway how much skating with them means to me, but one can try. I love them, and I love the sport. More than anything. There. Tried.

I am not on the roster for Saturday Night. Non-Derby folks, it takes a LOT more than a month to achieve the skills needed to Bout, trust me. Months of work harder than you can imagine, it's a serious sport and an art. Besides the actual skating, you need to learn the GAME, the strategy, and the WHY of the game. It's not a free for all. Every move is for a purpose. I got to seriously watch a scrimmage the other night, and it was all I could do to not say "Whoa, stop, explain that to me, Gods, that was beautiful.." These are the things I will learn in the next few months. From them.

That being said, I AM skating! And am just as excited and a proud as if I was Bouting! Pre-Bout, we'll do a sort of Derby 101, explaining the game, and the moves, and I have landed in that group. Which makes me so happy. Could not have happened a month ago, and when I think back to six months ago...

Every sore muscle is so very beyond worth it.

See you on the track!

Love and Pretty much everything this week,
Lorraine

posted by FabulousLorraine at 8:53 AM

I think of those indescribable moments as being in Grace...connected completely to my center, and All-that-Is...beyond thought, just wholly alive. And you're right, words are insufficient.

And Hooray for all these good things. I still owe Jess a submission...darn it.

I do like that picture, and the joy you are getting from the riding, and derby!

This is off-topic, (and I'm normally a lurker) but I'm trying to find the name of the product that Lorraine has used and recommended that cleans cat pee stains and odor really well. My roommate has a cat that's peeing everywhere, and we need something that works (so far what we've tried has only been semi-successful). I'd look it up but I'm not finding a search function on the blog. Thanks!

Lorraine, keep it up! You look great!

i know there is derby in lala-land, i should go search it out.

That horse would have been a fantastic blocker!

Yay for bouts! We're having a double header here Saturday and I'm taking a bunch of friends. Then next Saturday I start skating with the rec league! (eeeep)

There was a poll, too about doing a little/jrs league. How awesome would it have been to okay derby as a kid?!

Oh, and previously-lurking-Stacy: any enzyme spray should work, but some brand names are Anti-Icky-Poo and Urine Gone. You should be able to find them at a drug store or home store (if you're in the US, anyway)

@stacy... I think you are referring to a product called "Anti-Icky-Poo. try searching that on line...

And Lorraine, please correct me if I'm wrong.

Stacy: I believe the stuff in question is called Anti-Icky-Poo.

Aw, thanks, Medeadly. :) Though if you really loved me you'd trim these bushes outside the window.

Yeah, I sure stuck my spear in that thing. *stab* I have to get a page up for the next one, don't I. Starts...Sunday. Chris Lincoln. Yes.

Hmm. I see we all know what the stuff is. But who among us actually has a bottle besides Adri?? :D

Anti-icky-poo FTW! Stuff is amazing and you can buy it online. Stacy, now you've de-lurked, come hang with us. There IS no off-topic here. We feel very strongly about the whatever theory of comments..

Derby Brats are wonderful! I'm trying to keep my FB comments friendly as I have a bunch of them as Friends there now.

I SO SO SO love it that so many of you are doing rec leagues, getting a chance to skate and play the game, however you do it, is WONDERFUL!

Doesn't matter at what level. It's doing it that's the cool thing.
Taking it as far as you love it.

Not on the tracks you won't find me.
Well done on the horsing!

I am in a foul mood by the way. I don't take to stress nicely.

*waves at the Fiends*

Love you all. Swamped, but not entirely underwater. Be back someday.

Thank you so much, everyone! I'll delurk now. Yay!

It was fun though...

I hope all the fiends made it safely through the bad storms last night. I will get on my soap box for a second and remind all of you that a weather radio can save your life! Even if you're in an area that hasn't generally gotten tornadoes in the past, climate change is making the weather crazy!

That's a PSA from my meteorologist hubby ;-)

I'm going to be petting yarn on the hoof and off, is anyone else going to Maryland Sheep & Wool?

Day seems, slow. I don't think the world is working. My Inbox was EMPTY this morning. This never happens. Ever.

And riding got pushed back. I have all this TIME. Not sure what to do. Opted for cleaning stuff up here. Getting to be a habit with me, this cleaning thing.

The basement still scares me tho...

Good morning (or fill in the appropriate part of the day) fiends!!

The first night garden project actually had more submissions than I thought it was going to (and there's still more time!!!) I have to add another category to the menu...should have done that yesterday when ben was w/ his dad at "take your kid to work day"

Today, we're going to the boardwalk and the beach w/ ben's friend and his awesome mom...his other mom is in India with the 12th graders from ben's school. If you're interested in what they're doing, they're keeping a blog. They met with the Dalai Lama, spent a few days at the orphanage the school helps support. Have I mentioned how AMAZING ben's school is?!?!

OK, off to play with my new toy...I got myself a Viking range from craigslist yesterday. I am beyond excited!!!

Love that photo, could use a fiddle though. (and apparently some underwear!)

There is actual sun outside! What an amazing thing!

And, on the topic of take your kids to work day, I was super pleased to see little tiny girls running around excitedly here yesterday. There's still such a gender disparity in the game industry, it's nice to see girls coming to the office and know that a) they're loving it, b) they're seeing women working here (ok, two of us, in my group, but still).

Ben's experience at take-your-kid-to-work-day was seeing how many boring meetings dad has to be in, playing lots of video games while he was in the meetings and eating lots of sugar because he found the mini-kitchens!

When they got home, we quickly scarfed down takeout (stove was being hooked up) and ran off to see Maceo Parker. It was a wonderful show and ben's been listening to him for years. This sparked a really interesting race conversation. Ben said, "I thought he had light skin." I asked why he thought that. He said, "He doesn't sound like he has dark skin, he sounds American." Which made me realize just how white our town is. So we talked about who he knows (both personally and on tv/news, etc) with darker skin. Pointing out Obama first (ironically on the day of the "long form" birth cert.). Most of the people he knows who have dark skin are Indian, not african american and they all have Indian accents.

I love this age and the things that come up and I hope I'm explaining things in a way he really get "it". We've had deep religious conversations lately too. Talking about how our neighbors are very different in their views, the wife is catholic and husband is atheist.

Sorry, didn't mean to go on and on, i just love the inquisitive stage ben is in....i hope it's not a stage actually! I should really set up my own blog and not take up comment space here for this stuff sometimes!

I AM SO READY!

And figuring out what to wear, which I shall do like I do for gigs and find something at the last minute. I have pink hair and can do silver eyes, and I have my very own League Tee SHirt with my name on the back!!!!

Apropos of nothing, I just submitted a story to Night Garden for the first time. All journeys start with one step.

I should do a new post while I am yet awake. Could happen. I am pretty awake, thank you post bout Mountain Dew....