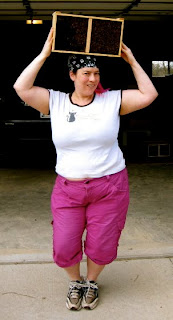 An Easter Bonnet of sorts, one supposes. Me with 10,000 bees on my head. Mostly in the box.

We hived the last four of the seven hives today, myself, Birdchick, Non-birding Bill, Kelly and Laura McCullough. Lovely day for it, and for a change, I need do nothing in the way of describing this event, it's all on video!!!! More than I might have ever wanted to see.

(especially as my FIT and weight loss is not at all being shown off in the bee suit. Ah, but it was too tight last year at any rate.)

The one thing I will say tho, is that, I have a bee phobia, I'm really scared of them, most reluctant beekeeper on the planet I am. I really wanted to hive this package with no gloves, barehanded. One can. Mostly it works out ok. More or less.

Couldn't do it. Too scared.

And there is the win.

posted by FabulousLorraine at 5:36 PM

lovely bee bonnet you have there ;)

Like I said on FB, you rocked the bees!!

You are one sexy, couragous Goddess of Bees.

(sorry, had to get that out of my system)

i will repeat: BRAVO!!
geez but you've come a long way--
no gloves even for as long as you did, is amazing.
don't doubt that, sister.
"Dobriy den'" to the new Russian bees,
and i love Sharon's matter-of-fact keep-you-on-the-train dialogue.
well-done!! i KNOW how you feel about the bees,
and how brave you are being.
xxoxoxo

You can do anything, you know.

You DO know, and therein lies the ROCK.

Oh yeah, today (for you) I bought black violas.

i just watched again, and crikey, you are so calm even when slightly freaking out. i'm freaking out just watching. bravo! also, the sound of the hive buzzing was slightly terrifying. they are really loud. louder than i expected.

Lorraine, you did great! (That's a lot of bees!) Birdchick was calm in her instructions...and the whole process was fascinating!
(I wouldn't have wanted to try w/ no gloves!)
A true inspiration you are.

That is amazing. I have always thought beekeeping would be a really cool thing to do, but I am allergic to bees so it would probably be a very short lived cool thing for me to do.

What are you spraying the bees with?

That was absolutely fascinating, and I am in awe of you going glove-less for so long.
CarolAnn, I'm allergic to bee bites too - which is why I love doing this bee keeping vicariously through Quiche, Birdchick and Boss!

Wow you and Sharon were an awesome team. You rocked. Kept your cool.
W00t!
Holly Abbie

Hi! I've been following you for a while, but haven't commented before. You did great with the bees! I work with bees, but I've only ever hived wild swarms. -- Grey Walker

Said it on FB but it bears repeating...great job!!! First time hubby hived bees (unexpectedly) he was wearing a T-shirt, and shorts and sandals. He's moved on to bee hat, long sleeves, long pants and gloves since. Wise man!

And he was never bee=phobic. (Unlike me, with too many memories of stings....

(Kittens continue to be tucked in the chicken coop. Mama has let me get to within about 15 feet of her, but no closer.)

Jumpin' Jeebus on a pogo stick, that's a lot of bees!

That looks so invigorating! You did great Quiche! And I am all for the drop everything and move away method of "had enough need gloves now" :-)

She's spraying them with sugar water. It makes the bees happy when they get moved.

I am fairly sure you will do it. Although the bees must tickle like crazy.

Great picture of you!

Whoo! So much catching up to do. :) Loving the derby news, and the FIT, and the bees, and so relieved that Magic made it home safely. Now I have to figure out how to shoehorn more minutes into the day so I can de-lurk more often.

So I did. And it is covered in rumbling cat.

We do this every morning.

That's a fine way to start a morning, Phi.

And that is a fine picture of you, Q! You look great.

That's all I've got on less than one cup of coffee. The Men With Hammers are back. They are very efficient. I will have a new closet soon! Yay. I know you're as pleasesd by this news as I am.

It occurs to me that I do not know how to choose or install shelving units and what-have-you for said closet. They won't appear magically though, will they. Hrm.

Great day, I woke up SO inspired. Had an amazing practice last night, completely unplanned, saw a youtube vid on Leg Whips, texted Jinx, decided to go to the practice space, talked two of the really GOOD skaters into coming, learned so much..Had beyond fun. Loved that.

Not, however, leg whips. Those may take more than an evening.

I was ok on the bee thing, terrified, well, yeah, but ok until the bee crawled up my SLEEVE. Next time I will band the sleeves.

I need closets too. I have ONE in the Spooky House. Fortunately, my skellies don't need to hide in them.

Can't watch video right now, but know it will be amazing. Even if you don't quite make it, just trying something that scares you is Total Win.

Of course I should have checked your blog, duh! SO cool! I am going to be a better beekeeper because of you guys! (I am probably going to be a BEEKEEPER, because of you guys, but you don't need the pressure). Interesting to see the sugar water instead of smoke; they told us it was too cold in NH to do that, and you're in no warmer shape than we are. Best wishes! Good forage! Thanks!

All right, Fiends. Five days left in the Back to the Garden challenge, and only seven art submissions so far. I reeeeeeeaaaally hope this means I'm going to be bombarded with more art this week.

Still only $100 raised for this effort, as far as I'm aware, unless Janet knows something I don't. But disappointed. Tapping my foot softly yet steadily. Throw some fivers at Janet! Help us make Jason's participation worth his while!

Look at the stuff! Send more in!

OK, next I try touching bees, as you inspire me to.

jess, the night garden donation button for paypal does not let one add a note, or did not let me add a note. :(

i'm still thinking about my submission. sorry been distracted

Think next time I will have to add a note that says donations should follow up with an email saying it's for the challenge. Stupid Paypal.

"...donations should follow up with an email"? What the hell kind of grammar is that? That was very poor indeed.

Gee Lorraine, if you can't hive bees, and all you can manage is derby, dressage, music, and Bengals ... you might be a loser.

I am a loser! I haven't been here all day. Or blogger Night Garden.

Sorry guys. Some Fearless Leader I turned out to be.

Yeah. Loser. Right. I am afraid I should have to object ...

Why is my trash can icon gone? How can I delete this no doubt well meaning comment?

If you can go to the Blogger Dashboard and click on "comments" rather than of "view blog" you should be able to do some house keeping (although really ythe trash can should be there since you are obviously logged in...)

Okkk. Trash cans are back and the comment seems to have been deleted, but not by me. Do I have an admin fairy????

Going riding this morning, My Little Pony is a bit lame tho, so I am riding My Little Painted Pony, Rommy. She's not exactly a dressage horse, so I kind of want to try some fun things, no saddle, tandem, riding blind? Who can say...

I vote for some form of circus riding!

Pink Tutu!! Spangles!! Hula hoop while standing on horse's back....