Honey for the X County Fair! 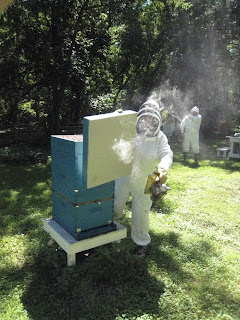 Tomorrow is the day I take our Honey to the X County Fair for the Honey Judging Contest! We've won the past three years in a row, and have hopes for yet again, another Blue Ribbon. We must defend out title!

The bees this year are all new hives, as you will know if you've been following along with the Boss and the Birdchick. And it's been a kind of odd season so far. First it was a very cold spring, and things didn't start up with their pollinating quite as soon as they should have, and now the past couple of weeks have been HOT, and no one, even the bees, feels like doing all that much. Lots of days I see them just hanging out on their Bee Porches, fanning away. This means there is not a great deal of honey, so far.

Both the Boss and Birdchick being unavailable, I went, taking Kelly McCullough (who volunteered willingly, more or less) and Woodsman Hans (who had no choice, he works for us) down to the hives to see if there might be some honey we could steal.

(Longtime Gentle Readers will recall this was the reason I spent so many years opposing the hives in the first place, KNOWING Boss would be gone, and I'd be nipping out for a comb or two. I am still reluctant, but have overcome a LOT of Bee Fear thru sheer determination. Almost, I like it.) 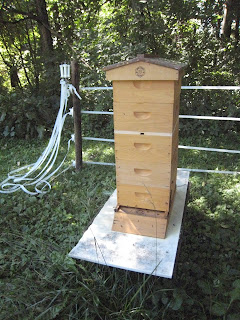 The Hives out in the woods, pictured first, didn't have much, and I didn't want to take from them, so we closed things up, gathered our smoke and disappeared in a puff of it.. Here is the Garden Hive, which has been going at the honey thing like all tomorrows parties.

I think they Suspected Something. Angry bees, swarming around, flying, BUZZING and lots of bonking, which is Bee Talk for "Get the hell out of here now before we pull out the stingers" Yes, they knew what we were up to. We wanted their honey, and they knew this was no "Hey, here's another frame of supers" mission. 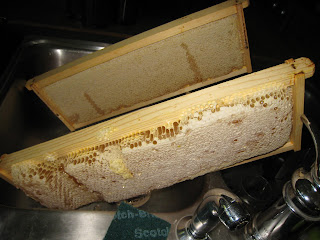 We only took the two, as you can see, they have been working overtime. I stayed calm, cool and collected and closed up the hive, (Lorraine talk for "Didn't run screaming") replacing the frames, of course, but left it to Hans to talk the bees into leaving the frames, while Kelly hooked up the Bear Proof Electric fence. 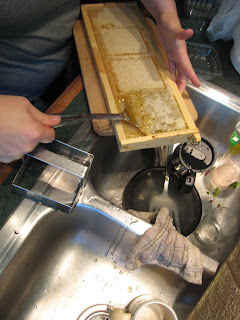 At the Fair, there are two Honey Categories: Extracted, and cut comb. Cut comb is most often in what's called a Ross Round, a handy round thingie bees can buildcomb in and pops right off, perfectly shaped, when one wants it. Sadly, none of the Ross Round Hives had anything going on in their rounds, so I had to try and cut some, and get it off the frame intact and perfect. 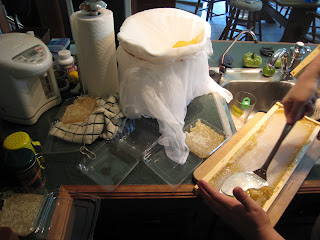 Pretty much worked, and I got about four little boxes of cut comb, one of which will sure to be perfect. Sticky Fingers crossed.

All honey tastes differently. I am trying to think how to describe this years. It's from the first of the Spring Flowers, so very light, tho not the pale white you sometimes get. Very golden, sweet of course, but with a hint of spice. I will solicit some opinions and let you know. 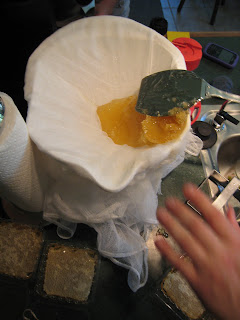 For the extracted honey, I use the high tech method pictured above. I call it the Bucket Method. Get some cheescloth to stay on top of a bucket with a rubber band (the most difficult part of the process) and scrape the comb and honey in, and Voila! (I think that's French for "there you have it") The honey drips thru, and you can then jar it up!

And then I take it to the Fair. Judging on Thursday, I believe. 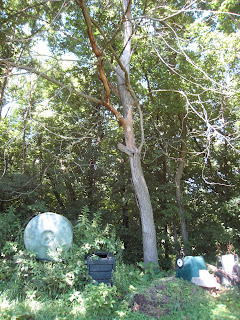 One final bit, because it's a topic I love talking about, the Leopard Lounge is getting trees this Friday. We're all set with Truck, Chainsaws and Beer. (I use that word "we" rather loosely. I believe I help haul logs, and fetch beer. Quite possibly make lunch.)

To that end, I found this Tree, and am hoping it will work nicely (ie come down without smashing anything or killing anyone) as it has lots of crooks and odd branchlings and will make lovely places for the Leopards to lurk upon, basking a while in the sun, while waiting for prey, and, finally, playing Death Drops From Above.

posted by FabulousLorraine at 1:08 PM

I am experiencing a sudden craving for honey...

Also, congratulations on your bee-wrangling skills.

I'm a vague-an. Meaning, I will give up meat, fish, eggs and dairy in order to diet and be healthy...but I'm not giving up honey in my tea. I am perfectly happy letting others do the gathering for me though. Good luck at the fair!

Not I want some honey, too.

Good for overcoming fears by simply DOING IT!

Good luck at the fair! I don't normally love honey, but I bet it tastes great when you have been a part of the process!

Lorraine, I love the bee stories. You seem to be dealing with the bees better each time. Good luck on the honey at the fair and with the tree feature for your leopards.

Has there been any other sightings of the bear from before or has the fence seemed to have done the trick?

Good luck with the honey!

Best of luck at the fair.

Is it really year four for the honey?? Have I really been following you and the boss that long? Where has the time gone!?

Also, best of luck at the fair. It's going to be interesting, what with the new bees and crazy weather, but hope you come back with the blue ribbon again.


i Love honey posts. makes me want to go bee-ing. i'm terrified, but i think i would put my big girl panties on and deal.


also, am i the only one who wants to play "death from above" from the tree?

Heh - Vampi I had that thought too. I also thought how Magic would knock you out if he played dropcat on your head.

So impressed with how calmly you now deal with crazy bonking bees Quiche. Good luck at The Fair.

I helped!...kinda. Well, I smoked the bees for Boss a couple weeks ago while he did some beekeeping and Mum and Q looked on from a safe distance.
Time for a beer/honey/Bengal party while the Boss is away!! Can't let this good weather go to waste. Or that yummy-sounding honey...
Good job and good courage, Lorraine! Here's to hoping for some good marks at the fair.

Becca darling - its good to hear your voice here!

sally, you misunderstand, i want to drop out of the tree on the unsuspecting ;)

Oh no Vampi - that's what I want to do too. And then run away snickering.

I SO want to taste that honey now...

Well done on the honey smuggling. You're a pro!

How are you going to position the tree?

I can just see those leopards flopping over a branch.

I am always awed by the honey-collecting. I have to give major credit, because the idea of it terrifies me. Although, the honey does sound divine. *fingers crossed* for the contest!

Oh, and that tree for the Leopard Lounge? AWESOME. So exciting!! :-)

I was twelve years old last time I ate honey ... and it was cookie honey, packagey honey; it was not REAL honey. I love your bees.

I think I'm more of a "death from below" kinda gal...I was never good at tree climbing even as a kid.

Good luck with the honey!!

Ah, Nathilie, I'll see what I can do. Always up for a little international intrigue ;)

It won't be ONE tree, it will be many branches interlaced into a wonderful climbing adventure.

The funny thing is I took pics and sent them to Slam'er (who is taking the tree DOWN) thinking oops this tree is WAY too big for taking down, and I got back a "Nah, it's med to baby Tree Beast, no worries."

Does Derby breed such strong souls or does it merely attract them? This is going to be SO fun!

I can sample honey when I come and visit, surely?
No need for intrigue (unless you want to spice up your life even more - you sure seem to like it HOT).
Will the tree fit inside the bengals' lounge? THAT is the real question.

Good for you Quiche! getting in there and just doing it is just awesome. You are a powerful strong willed woman!

re: the bees that were aggressively defending their hives, do you know what kind of bees you were harvesting from? my husband teaches beekeeping & was curious to know if they were from the hygienic strain? he was wondering what the temperament of the hygienic bee would be like

We have RUssian, Italian and MN Hygenic bees. I know these aren't Russian, but can't recall which of the other 2 they were.

The tree will fit, Slam'er is going to cut it up into bits, so we can form a Jungle gym sort of thing for them.

Honey judging is this afternoon!!!!!

I need a vacation. Like a real one, away from home and without stress.

And congratulation to the honey snatching team, who won awards again.

YES! Two more Blue RIbbons for US!!!!! We kept the title!! ANd the other beekeepers are going to be gunning for us at any moment!

It's the sort of day here where you wake up, need to shower, then think, why bother? Tooooo freaking hot, humid and gross.

Congrats on the Ribbons! Does winning make the scary bees worth it?

Congrats on the honey!

oh, and I just worked out! Damn skating just hasn't happened so I got up and put on workout clothes instead of regular ones, grabbed a workout on Netflix streaming and frickin' did it. My back has been killing me and I know it's because it's weak and I have no abs!

Congratulations on the blue ribbons! Have you been to tell the bees?

I'm OK with the bees, tho I doubt I will ever be a TRUE friend to them.

Really not with Wasps. Been two days now I've been out there with Wasp-B-Gone in th eLeopard Lounge trying to kill these things off. They chase me. Hmmph.

Good on the workout, CHantrelle! EVery bit helps.

SPeaking of which, up since 5 girl is having a nap before her workout. BLISS!!!!

Until the phone rings of course...

It felt good. I didn't do a huge burly workout, i kept it mellow and made sure I was holding my body right so I can get by shoulders, arms and back into the right shape, alignment and strengthened. That's my wrist problem, I have weak shoulders.

Anyway, after working out I spent an hour trying to buy Tori Amos tickets and failing. Presales suck. Now I have to do the general sale tomorrow during my rolfing appointment. I will seriously duck out for 10 minutes to buy the tickets on his reception computer. I take my tori shows seriously!

We have wasps trying to nest at under our solar panels. They seem to keep to themselves, they aren't aggressive, I hope they stay that way because I can't really get to where the nest is!

Other beekeepers can get blue too, right? They should just get friendly with you so that you can all be the best together!

I am doing a proofreading project and it is so so hard for me to stay focused on it. Thanks for the diversion!

I'm so glad I'm not sharing your weather.