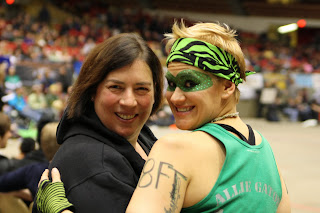 In the spirit of keeping with the idea that I am going to post more, here I am, nearly a Zombie, but writing down the weekend you've been getting bits and pieces of...

First off: Gig on Friday, with Paul and Lorraine. FINE time! Much rock was had, and I am really excited about New Years Weekend! We play both Friday and Saturday, and there are a lot of people I've been missing. The rock is back and both nights are going to be some serious fun. Please come down and be a part of us, either night. We're not playing as much as we used to, and it's such a part of what I am, that when I do get on stage some days, it's going to 11. Trust me.

I learned a LOT this weekend with skating and the first thing I learned was on Saturday morning. If I am going to do back to back Gig with Derby practice, I need to drink WAY more water. You don't think about it on stage, all the time, but your body sure knows it the next day. LEG CRAMPS!!!! You know the ones you get in the night sometimes? Imagine both legs only not just the one muscle, front and back, all of 'em. Never been so close to crying ever.

Worked that practice tho thinking, you'll be scrimmaging in Madison tomorrow learn as much as you can NOW. Leg cramps do go away. Do it NOW.

After practice, (and a quick nap on my part) we nipped down to Madison to see the opening Bout of the Mad Rollin Dolls season, GREAT skating! One of their teams, the Quad Squad, was the one we we were set to scrimmage the next morning.

The coolest thing tho, was that this is the team my friend Allie Gator, one of the best skaters going and certainly as good as anyone skating Derby these days is, was on that team, and the space we were scrimmaging at was the very FIRST place I'd ever put on Derby Gear and tried skating, with her, Joan of Dark, Jane Ire, and Fluer De Lys, a year ago.

Hang on, even have a pic of this moment.. 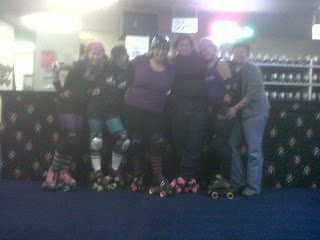 And a year later. Back to the same space, scrimmaging them...With MY team. Chippewa Valley Roller Girls. 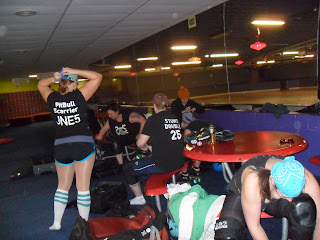 Getting ready in the same spot. Cool? Do you not THINK SO??? When I was there last, Joan and Allie and Jane held my hands, Fluer lent me gear, I skated for up to 2 minutes at a time before I had to rest. Uh-huh.

Wasn't sure I could skate Derby then but there wasn't an OPTION on this, they knew I could. Warming up this morning, watching the Quad Squad and my team, I knew there was no way I was nearly as good as anyone on this track, either team. Not false modesty here, I'm not.

But I was THERE. And there was no way I was going to let this one go by. Sometimes you just think, there are things in life that if you don't go the hell for it, you will regret it for the rest of your life. It doesn't MATTER what you feel tho, as long as you DO it. Trust me on this one, a little trial by fire never hurt anyone. 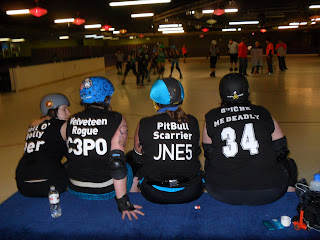 I learned so much. It was very like, in a lot of ways, that Flash Girls gig, opening for Warren Zevon, my third gig EVER, sold out show. We weren't READY, we had no clue what we were doing, but that doesn't much matter when it comes down to it, it matters if you DO it or not. 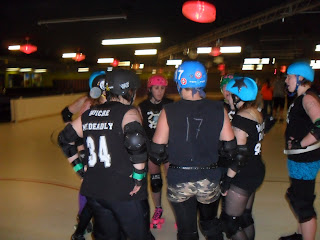 Playing music, I know and trust my bandmates, I know my instrument, I know I rock and can gauge an audience and rock them, making magic and KNOW this will work, which is something you learn from getting on stage a hundred times and experiencing.

Skating Derby, I am back to square one.

But I'm learning. And I trust my teammates. Did I rock this? Yeah. I did. I had a couple good moves. I was THERE. I got knocked over, I got hit, I fell down. And got up, caught the pack, went back in it, and did everything that was in me, the best I could do.

Did I muck it up? Yup. Sure did. Doesn't matter. I learned.

I posted on FB that all I wanted for Xmas was one good hit today on Allie Gator, and I got it. She let me, the moves were right, last jam of the scrimmage, there was an opening, she waited until I got into the right spot for the hit, I hit her. And it was a good hit, I did it right. (I love you Gator, since the day we met)

That means everything. Went to the box right after for a major forearm and cutting the track on the way to the penalty box, 2 min, but yeah, I did THAT ONE MOVE right. 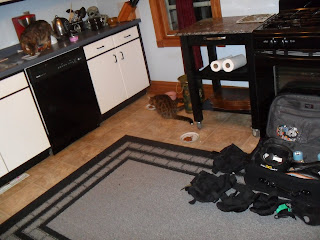 Came home, fed the Bengals and aired out my pads. Can hardly move, so tired, it's hard to think. And yeah, I hurt. But I know what I want, I know what I need to work on, and I have a whole lot of people who KNOW I am going to do it.

posted by FabulousLorraine at 5:37 PM

You rock. :) Literally and figuratively.

Yep. You rock. Wish I was right there to yell and scream and urge you on!

It's awesome that you find more and more things you so love. I think more people to keep exploring and living it up!

superproud of you, my daredevil love!!!

wow! so awesome to have the document of the difference a year makes.

might i respectfully suggest a second meeting of the fiends? rock-n-derby 2012?

That's a rather fetching additional photo!

Rather fetching is right!

Wow!! Way to get in there and give it all you've got!

Awww. Such a great time!
Thanks for the first huge smile of the day.

Rock!
Great blog to wake up to. I love how much you love this.

Yay! Good to know your hand/arm is all healed so you can skate again. :)

Um, yes, now that it is healed, I can skate again, hee-hee, really slowed me up there for a while....

Thanks for calling me fetching. I don't think I've ever been called that before!

And now to tick the box.

Marjorie - so sorry Tybalt is sick :-( It does sound like there are possible solutions and a pill tucked into a sardine is not a bad idea. Especially as it seemed to work!

Had kind of a Bad Day, HATE Shark Mondays, especially after gig/derby weekend. Got a little aggressive with the weights tho at the gym which fixed me right up..

My I am taking my BADASS self to the couch.

Your HOT badass to bed. a rest sounds well deserved. May the snoozes be with you.

So much awesomeness, so little time.

I hit the bitches tonight. They hit me back. Took a forearm right in the nose, ow freakin ow, but hey, how was your day?

Pretty good. No bodily parts hit my face. I'm madly trying to think of what the heck I can concoct to wear to a trash cabaret, and failing so far.

eeee is your nose still in the customary spot?

Thank you all for the good wishes for Tybalt. He's been taking the tablets for the past three days (hidden in sardines) and seems much better in himself. Not out of the woods yet, but he is definaly doing better, so - cautiously optimistic.

Some of you may have seen this on FB...but it's worth putting here as well...


The Shortest Day by Susan Cooper

So the shortest day came, and the year died,
And everywhere down the centuries of the snow-white world
Came people singing, dancing,
To drive the dark away.
They lighted candles in the winter trees;
They hung their homes with evergreen;
They burned beseeching fires all night long
To keep the year alive,
And when the new year's sunshine blazed awake
They shouted, reveling.
Through all the frosty ages you can hear them
Echoing behind us - Listen!!
All the long echoes sing the same delight,
This shortest day,
As promise wakens in the sleeping land:
They carol, fest, give thanks,
And dearly love their friends,
And hope for peace.
And so do we, here, now,
This year and every year.
Welcome Yule!!

And Fablo, hope your nose if not 'out of joint 'and that the Sharks have decided to hunt elsewhere!

Love seeing you so happy, Q. Look at that face! LOOK AT IT.

You are fantastic my darling Quiche! So glad you and CVRG were able to come down and scrimmage with us! We had a blast! ;)

May you all have a joyous holiday(of whatever name) full of friends, love, food, relaxation and pleasant surprises of all sorts. My world has been delighted and enlivened SO much by knowing all of you, dear fiends, and our chieftest fiend Ms Medeadly!

Merry Christmas to all you wonderful fiends!!

I'm so glad you are all in my life.

The girl who kept our cats during the Giftmas weekend is raising Bengals! She had some kittens I played with yesterday when we went to pick up our own monsters: So cute, so lithe, so talkative!

Did you take photos of the kitties Nathalie?

No. They would have come out all blurred I think. This kitties are golden quicksilver. VERY active.

how in the world are you all? just stopping by to say HI! 'cause i'm up waaay too late which means i have the peace and quiet to think of it.

made it through most of the holidays. one to go.

enjoy the gigs this weekend, Fablor!

i for one am quite relieved to have our shortest day come and gone. listened to T. Gilmore's Strange Communion daily for a week or so there to help get me through the dark. sol invictus

NEW POST IS UP! The Gun Blog complete with pictures!!!!!