Yes, I know, it HAS bee a while. Far too long. I've missed you, you know. No, really, come on, Blog, don't be like that, you know how I feel about you. Some summers just catch up with a girl. We'll do better from now on, promise. See? Look! Bengal Pictures, you've always liked those.... 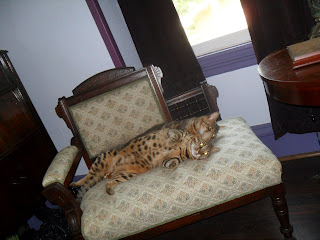 Seriously, this HAS been one of the busiest summers I've ever tried to pull off. Work has been, well, to admit, its usual hecticness, but you must admit, that's pretty hectic. And remember the salsa garden that Slam'er and I planted? Gardens, I've discovered just don't grow on their own, you have to, you know, DO things in them. And would you like to hear how much faster weed-things grow than anything else? A lot faster, that's what I'm telling you. Good news tho, salsa is going to happen in the next couple weeks, and that isn't going to be dull.

And then there's the gym. I'm going after some serious muscles and they do not happen on their own either, you have to work at them, and after you are done working them the heck out and come home, you tend to think things like: "Food. I need food. Wait, no. Hot tub. Hang on, where is my bed?" It's working tho, got another 18 pounds off since the beginning of June. 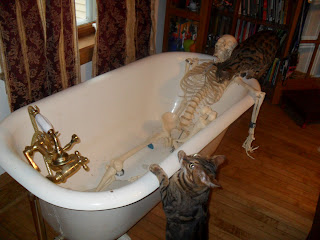 Ain't easy, for anyone who wants to check in on the whole FIT thing here. You know the people who tell you that it takes a long time, and there's only one way to do it? I am one of those telling you, and it's the most true thing anyone will ever tell you. You'll stall, you'll fail, you'll get up and try again, you'll work out until you cry and wonder why, at the end of the week, after all that work, you only lost a couple pounds.

Keep it up. They DO add up, and nothing you can do is going to make it go any faster. You know where you want to be, but what you have to look at is the space between there and where you are NOW.

I get a lot of mail from people who tell me they got inspired by my own FIT journey and have started theirs, go you guys! If you're doing this, you're rocking this, trust me. And if you want to, and you're not, what's stopping you? Tell me, I want to know. We, Blog and I, do have a comment section. Tell me what the problem is, what IS stopping you.

You feel too fat to go to a gym? Truth: NO ONE has ever laughed at a fat person working out in a gym. They will cheer you. You feel like you've tried everything and nothing has worked? Truth: You haven't stuck to my plan. Burn more calories than you take in. It works or your money back. Do you feel too out of shape to even know where to begin? Truth: Find your front door. Walk out of it. Bring your Ipod. Pick a direction and walk for 15 minutes, hells, ten, turn around and come back. Congratulations, you've just done more than I bet you have in the last year. Repeat.

You don't know what foods to eat or which plan to follow? Truth: There IS no Plan. You know what to do, and if you don't, google "A good book to learn how to eat a freaking balanced diet"

Are you scared, afraid, feel like you would look stupid? Truth: Everyone. Does. 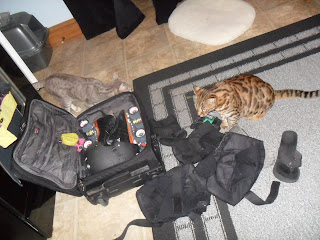 This wasn't where Blog and I were going today, but it turned into where it wanted to go, so here we are. I was going to talk about Derby, still the love of my life, but it does tie into what we're talking about.

I went to the MN Roller Girls Boot Camp a couple weeks ago. In a lot of ways it was the best thing that has happened to me in the last year and a half, second only to meeting and joining my team. Every single one of them was wonderful, friendly, outgoing and smart as hell about Derby. And really really wanted to teach every one of us as much as they could in the two days we were there.

And they did. No matter what level you were at, that's where they started. Like my own Derby Sisters, when I started (and as they do now)

Intimidating? Hells yes, pretty much everyone there was better than me. Did I love it? Oh yes. A year and a half ago I was a 260 pound couch potato, and now I am on a track with MN Roller Girls? WIN. Are they kicking my ass? Sure are!! Anytime, Ladies.

That's what I am talking about when I say what's stopping you? It doesn't matter what you feel inside, where THEY are, compared to you, as long as you don't let it stop you. Do you want to wake up in ten years saying "I wish I had tried, maybe I could have...."

We scrimmaged in the afternoon, after a morning of teaching. Going into exactly what happened would make this far too long, but each line out, in each jam, each team had a MN Roller Girl on it, to help, provide feedback, teach.It was amazing and I was not rocking it, except for one jam. One perfect moment of Derby, when I did everything right, helped my line and made a difference. For Two Minutes. Out of an hour and a half. I'd LEARNED something.

Win. Best feeling in the world. Worth working a year and a half to feel like that for that moment?

But it wouldn't have happened if I hadn't walked into the Zumba class, a year and a half ago, feeling like an egg with arms, barely able to flop around the entire hour.

Start where you are. And don't stop. Keep your eyes on the goal, but remember, you have to go from where you are, to where you want to be, and there's no magic bullet.