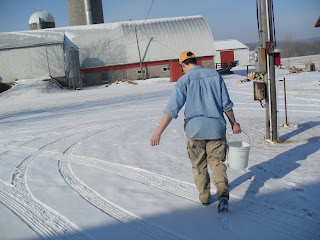 I spent my Birthday last week out on my friend Arm & Slam'er's family farm. Sadly, her partner SD couldn't join us on this one (remember her from the Gun Blog? These two know how to do ADVENTURE) it would have been funner had she been there, and we SURE would have had better pictures, but I do my best. Pretty sure she would not have dropped her camera in a field, left it there for two days and let it get run over by a truck too, as I did, but I'm a lucky soul, and the thing survived. Against all odds.
I expect everyone south of the Tundra here is saying "Ye Gads! That would be the first death right there, of exposure! WHAT is that girl doing without a coat??" But in fact, it was nearly 30, and here on the Tundra we think of that as "Spring" 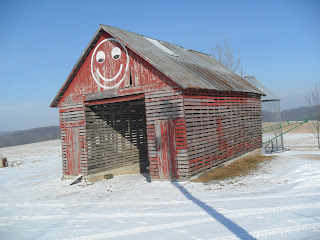 This is not a house. It's where corn stays. And chickens take dust baths. And a Big Smile looks down at you. Laughing evilly. 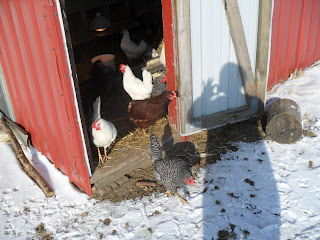 No danger here. Chickens. I like chickens. In a strange quirk of serendipity, my neighbor just came by with a petition. My next door neighbor. If she gets enough signatures, she can have chickens in her backyard. I signed. This should work out well..... 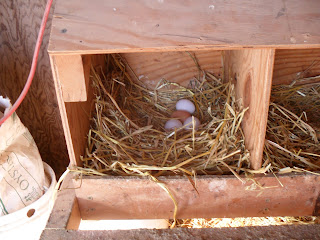 These chickens are for eggs, as seen here. I have to admit it was a little weird. For the first time I GOT IT, where the eggs come from. That's the farm, you GET a lot of things, up close and personal.
Slam'er, being an amiable, chatty soul, once told me, in great detail, on a Derby Road Trip, what happens to the non-egg-laying chickens. You don't want to know. We now confine our road trip chatting to...Well, never mind. We, er, talk about other things. 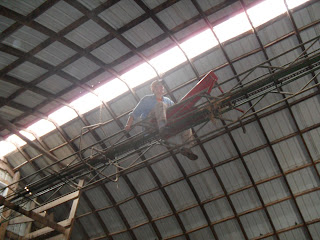 Back in the hay barn, which is pretty empty, I learned about how the hay bales get stacked. I didn't quite get it, how the Hay Flipper moved along, so Slams shimmed up the side of the barn about 500 feet up or so, and showed me how one could nip up and sort of push the thing along. Yeah. I ain't that brave. Here, look... 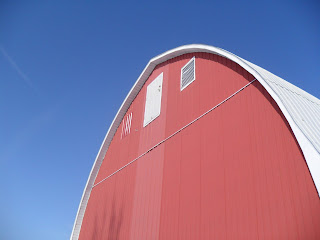 That door way up top, yeah, that's where the bales go in. Just another HORRIBLE DEATH waiting to happen. For fun, they have a rope swing they can launch themselves off the Gravity Boxes (real actual Farm Thing, not a Science Fiction Term) and swing merrily, they even have a basketball hoop, so they can swing one handed and shoot baskets, for added entertainment. 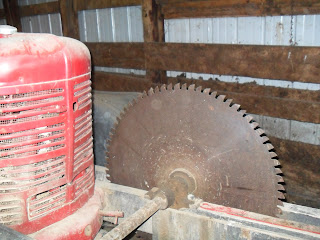 Ah, another death looming. A buzz saw? Buzzer? Can't recall, but it's for cutting wood. It's attached to the front of a tractor (one of about 25 on the Farm there, this was a SMALL ONE) Not sure if they actually drive around buzzing things, leaving a trail of wreck and ruin on their paths, BUT THEY COULD. If they wanted to. 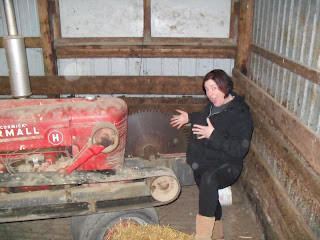 Yup. This would be it. Apparently, you need three people, one to sort of chuck the log at the other two, who then run it on thru the saw. They need a lot of wood on the farm, the house is heated by wood. Big old scary thing in the basement, you have to keep tossing in logs, to keep warm and NOT DIE OF FREEZING. Hope you have enough wood there for the winter.
It's also very warm by that furnace of doom, and apparently the place where they gather and hang out, the pipes you know. We hung out. It was nice. There's a root cellar filled with every kind of canned thing one can imagine (and a few you can't) and more homemade wine and beer than I have ever seen in my entire life. Living on the farm requires a high level of alcohol intake. I can understand this, after a day here, I'd want a beer too. 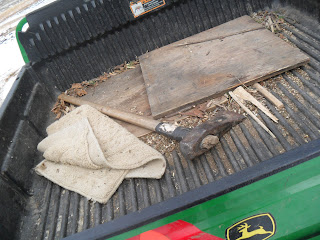 This is an axe in the back of a vehicle called a Gator. Yes, just another way to die. Or save yourself, perhaps..Tho it wasn't much help, there at the end. (Foreshadowing. Cue suspense music) Gators are handy for getting about a farm. Farms are BIG. This one, 120 acres maybe. For you city folk, WHOLE LOTTA LAND. Miles. 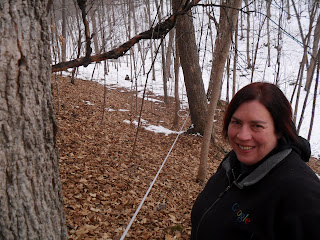 Here's a sneak peak at a future blog. They make Maple Syrup there on the farm, on quite a large scale. Syrup comes from trees. In the spring, the trees are tapped, sap flows into buckets, or if the hill is VERY steep, down lines, so one is not cliff climbing down hills with buckets of sap. An endearing but of safety really, on a Farm filled with MANY WAYS TO DIE AT ANY SECOND. I'll be slaving with buckets, I mean, helping in a few weeks, something I've always wanted to learn about, and we'll speak more on this then. 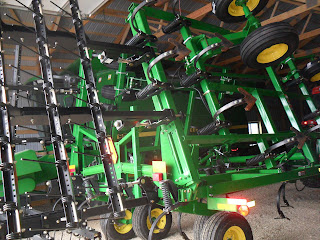 I just like this picture. I've seen these machines around for years, living here in the middle of nowhere, usually trying to pass them on the highway, but never knew what the heck they did. Do now. I'm quite wise in fact, and they've promised I can drive a tractor and make hay as the summer goes on. Is that cool OR WHAT??? (they are likely laughing just now thinking, oh, SUCKER!) 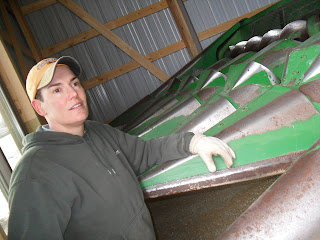 Here's Slam'er explaining exactly what a Combine does. Combines are REALLY FREAKY HUGE. And look like something Tank Girl would be real happy with. You could take over any town going with a one of these. The biggest thing I learned was if corn gets stuck, don't, whatever you to, stick your hand, or a stick in and try and get it UN-stuck. Whole lotta one handed farmers out there. 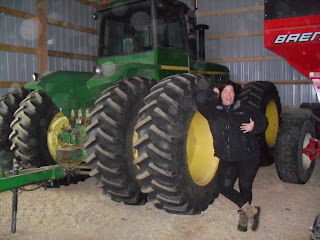 I need to drive THIS Beast. I'm about 5'6. The tires are taller than me. We have tires at the sport gym, for flipping purposes. All I could think standing there was please oh please no one tell that gym they grow them this big. I'll drive it, tho and have ALL THE POWER. (actually, these folks knowing me, I'll probably get the 60 year old one with the SAW OF DEATH on the front. That'd be cool too) 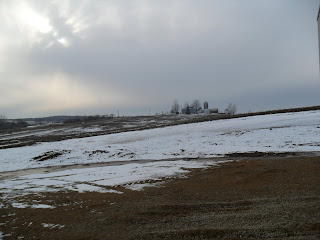 Now, I'm not saying anything happened, and I'm not saying anything didn't. There aren't pictures, and the only two that was there aren't talking much. But there's a lot of icy slopes out there on the farm and a lot of gullies that things can fall into, and if a Gator hit one and went down, you'd have to be real lucky if it didn't flip.
You might be real unhappy if that gully was filled with burdocks and you got covered in them trying to get the darn thing off the log it landed on, and you might be real sad no one had a phone, and you were miles from the house.
And you might be real glad you was both Derby and had Superpower Strength and could lift that thing off the log it landed on, pick off the burrs, and drive on home.
If you ever lost a Gator in Burr Gully, you'd be real glad if it happened that way.
But I'm not saying a thing.
Love and Farms,
Quiche MeDeadly

posted by FabulousLorraine at 6:13 PM   76 Comments

Couple things on my blogging mind today...First of all, THANK YOU, all of you for your love, comments, emails, FB's, and tweets on my last post. You have no idea what such an overwhelming response to posting the things I'd kept secret for so long means. Saying the scariest things out loud and getting such a wonderful supportive MASS of love in return, well, thank you. Doesn't cover it, but it's all I have.
I especially want to send some love out to the people who wrote, and posted about their own Secret Rooms. Telling your stories took a lot of courage. And there's a whole lot of healing going on.
To the people who posted anonymously, or who wrote and said, maybe, they could now talk, I will tell you how it feels a couple weeks out when you do this. It feels AMAZING. You can talk, you can speak out and it really, really is ok. Know this too, we're with you. All the way. You'll feel lighter, you'll feel like the THING you've been carrying around, you know, that weight that's never really gone, that stuff you've been expending so much energy on hiding, is all gone. You can start living. And loving. Trust me.
Write me, I'll listen to you. I know. It happened to me. Tell me. And again, trust me. I'll still like you no matter what happened. Fabulouslorraine@gmail.com.
And again, everyone: THANK YOU SO FREAKING MUCH!!!!! 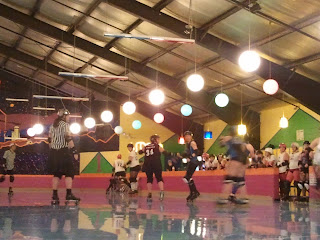 Sooooo....It's my Birthday today! Here's a couple photos from a scrimmage I skated in last Sunday. Not great photos, and I have no idea why it looks like I'm wearing a skirt, not mind you there's anything WRONG with wearing a skirt, but it isn't me. The cool thing about these photos is that they are of ME and I'm Bouting. And in the second half of that Bout, for the first time, I SO ROCKED THAT SHIZ. Perfect? No, but I sure as heck did make some moves, got some hits and had my butt on a jammer who wasn't getting by. Went all WRECKNG BALLL (thank you Pinky and Kitty for the half time talk) and got in there and did me some skating. Had that one. I can do this. I gots this. And am not going to stop smiling for a while on this one,
You see, it was one year ago today that I went to the Chippewa Valley Roller Girls fresh meat meeting and joined the team. 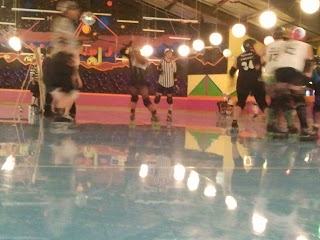 I remember that day REALLY well. Joan of Dark had been in town and we had gone to their Bout the Saturday before, which I watched, knowing I was going to meet all of them in a few days. Nervous? Hells yeah! Scared to death. Me? Skate? DO this? I remember talking to Joan about it on the way to the airport earlier that day and her telling me if I wussed out she'd kill me, and I remember getting kind of mad and saying THAT was not an option because I was SO GOING TO DO THIS and a little trial by fire never hurt anyone.
I met Jinxy that night, there were about 12 of us there, but by the end of the evening, she and I had exchanged numbers because we knew we at least, were making this happen. And we did.
It. Changed. Everything.
There aren't words for what this team means to me. There aren't words to say what it feels like being a skater.
I think what I'm trying to say is this: Don't let anything stop you from going full on into what you want more than anything.
You may get everything you've ever dreamed of.
Trust me. It can happen to you too.
Love and Birthdays,
Quiche MeDeadly

posted by FabulousLorraine at 3:55 PM   61 Comments