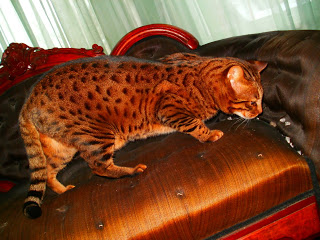 Right now, I need to talk to the world.

Most of you know I work in Bengal Rescue, and love them. A lot. About 3 years ago I took in an F2, King Lear and his F4 friend, Queen Mab. You can read about it HERE. In short, I took them in foster, but it became clear that Lear could not be adopted out. He is an early generation, F2, Bengal and needed a very specific home, with a person who could help him.

That's what I do. I take the hard cases and make them ok.

I can't make Lear ok. I've tried for 3 years now. He has too much in him to be housed in a home environment. I know what I am doing with these Kitties. I saved Magic, an F1, who no one, including myself, at the beginning, thought could be helped. I've saved and adopted out others.

I can't help him and it is becoming not safe to keep him here. 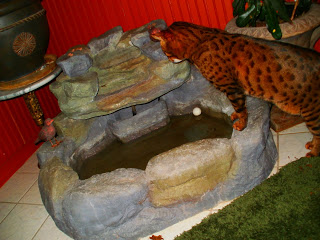 If you don't know Bengal terms, go and do a quick Google. Basically, F1 means Daddy was a Leopard, Mummy close to that, the higher the number, the further generation the Bengal is away from Leopard. F4 is considered domestic. They are still a lot of Kitty.

Lear has been, for the last few months, letting me know he is VERY unhappy. He used to wake me head butting me. He started shredding the pillow case. He used to pee on anyone's things who stayed over. He started pooping in my bed. While I was in it. He's started re-enacting the shower scene from Psycho, attacking the curtain while while I shower. And the list goes on.

I didn't come to this decision lightly. It took a long time. And I have been sleeping on my couch for some months, thinking about it.

I can't take care of him.

I also had to consider Mab. She is such a sweet girl, and would do so well in her own home with her own person. She has that now, about a month ago, I found her that home. It was better for HER to have the chance of a home and love.

After long talks with the head of Great Lakes Bengal Rescue, I ended up talking with a women who may well become one of my best friends. AMAZING women. She is Michelle from Avalo  Cat Sanctuary.

She  is me, only far cooler, and far more dedicated  to saving hybrid kitties than I am. Kid you not. If I could be her, I would be. I save Kitties that cross my path. I save as many Bengals as I can. She saves as many Hybrid Kitties of EVERY variety that come her way. And any other cat.

She takes the early generation kitties that cannot be housed in a home anymore and gives them what they need. She builds them condos, and outdoor runs. She visits each and every one, every day, and works with them. And loves them. 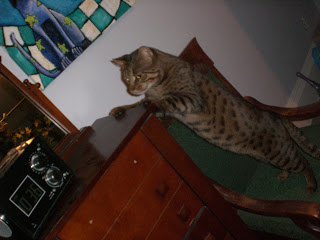 She does this all out of pocket. And no one knows about her. I want to change that. Here's an article on her Non-Profit Status.

Lear and I are going to South Carolina tomorrow. It's breaking my heart and making me cry. Between his crazy times he is still the loving, purring, trusting me to make things ok Kitty that he is.

I know she will love him. And care for him. And he will get what he needs.

She doesn't charge anyone. There is no fee. But she needs help. The place she is building for him runs into money. The food he will need runs into money. All the other Leopards she has need the same.

Can you help? If every follower I have on Twitter gave us a dollar, we'd have $5000 to save them. Can you give a fiver? Can you give something? Do you have more? Have friends? Can you just TELL people about Avalo Cat Sanctuary?

Can you please help me, is all I am asking.We have the opportunity to REALLY put this on the map. And save so many.

Whatever you give goes 100% to these kitties. To Lear. And Early Generation Hybrids like him.

You can paypal Michelle at: Michelle@avalocatsanctuary.com 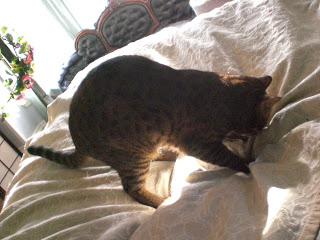 We can't save them all, but these have crossed our paths, and we CAN make a difference.

I don't think I have ever asked you for anything so important ever.

A little from each of you would mean so much.

I love you, and thank you, each of you.

And I owe you, big time. If I can repay the favor….