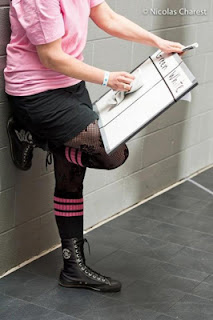 I was on Twitter this morning and came across a Tweet from someone I know there, and they were very excited about a Derby Road trip, across the state. WOOT, says I, have a blast!

Which brought me up sharply.

(For the NDR's, ie Non-Derby readers, NSO stands for Non Skating Official. They do a variety of jobs during a Bout, including Penalty tracking, Inside/Outside White Board,, Scorkeeper, Lineup tracker, Penalty Box Timing, Jam timer and a few more I am sure I am forgetting)

Ref: 27! CUT! (Waves Blocker off to box)
Blocker to Other Blocker in box: How long have you been here?
Other Blocker: Dunno. Long enough. I 'm out of here.

Ref: 32! Ejected! Too many penalties!
Skater: No way!
Ref: Hey, every time I see you, your ass is in the box.
Skater: So? Who's counting?

And without the Jam Timers, a Bout would be one long game of LA Freeway. Think about it.

(NDR's: LA Freeway is a scrimmage endurance drill where there are no jam times, one long jam, with skaters rotating in as others fall over dead and crawl off the track)

See what I mean? You can't have a Bout without NSO's. There is no JUST an NSO.

NSO does not stand for "Loser who can't skate" 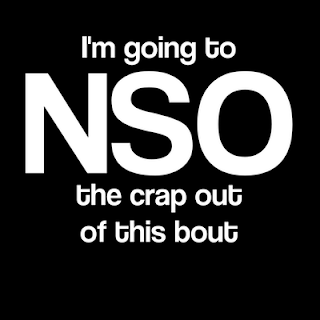 NSO's are volunteers, or skaters who are not Bouting, either because of injury, or not their Team in the League playing or perhaps because they didn't make the roster. (more on that later)

Volunteers sign up to be NSO's as a way to be involved with Derby without skating. They go thru training, and give their time and energy to make the Bouts happen. This is a GREAT way to be involved with Derby. The League will LOVE you. I have seen NSO's who are 100% as dedicated to their team (and often any other team who needs them)  as any skater.

Skating isn't for everyone. To be honest: Yeah, it's hard. And can be brutal. (Let's be really honest: it is very brutal) You want to be a part of this, but know your mind, body and desires are not up for skating? This is for you.

I saw a Bout a couple weeks ago where the Head NSO caught an error, which changed the winner of the game. In the last jam. Fair's fair. These people matter.

Skaters who NSO do so for their League. Maybe they haven't passed minimum skills yet, maybe they are hurt, maybe they didn't quite make the roster.

I've seen some very sad skaters, who want more than anything to Bout, but didn't make it. This time. This is another subject entirely, but hear me: If you want to Bout, you will. You put in the work, the time, the sweat, the pain, dedication and drive and you will be on that Bench next time.

You aren't Bouting this time? Suck it up. The Bout can't happen without NSO's, and NSO's are every bit as much a part of the Team as Skaters or Refs.

NSO is not a secondary position. I believe I made my point as to how a Bout would go without NSO's. I never, ever, want to hear the phrase "Just an NSO" ever again.

Has NSO become a dirty word? As if NSO's weren't important, the ones who couldn't make it as a skater? Nothing could be further from the truth. Instead of NON skating official, how about "Bout Officials" (Which doesn't quite work as I am certain no one wants to be known as a "BO" but hey, I am open to suggestions here) Perhaps "NRO" Non Reffing Official.

Running a Derby League is a HUGE amount of work. And the people who are giving their time and energy to work as NSO's are working just as long and hard, as the Skaters. And have just as much impact on a Bout.

And are doing it for just exactly the same reason as the rest of us.

Because we fucking LOVE Derby.